An early morning walk on the Étang de Leucate 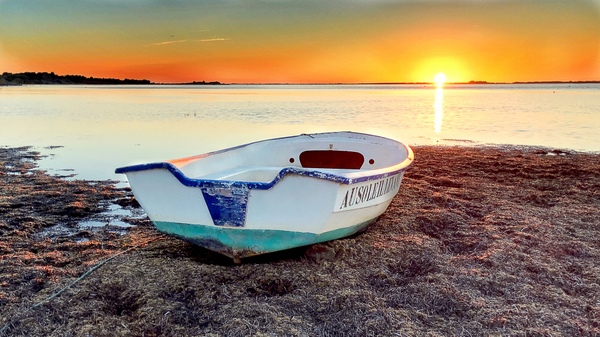 A water-side dingy on the Étang de Leucate

Each morning follows the same pattern. I climb out of bed early, make a coffee, try very hard not to wake Cynthia, and try even harder not to wake ever-energetic Abbie. I need to focus on work. I need to find a way of generating more of an income. We rely on Cynthia’s pension too much. Cynthia doesn’t mind. I do. I’m supposed to be the hunter-gatherer, the provider. I’m not.

So I take my MacBook and my coffee, unfold my Lavolta bed table, climb onto the Hymer’s fixed rear double bed. I tether the laptop to my iPhone 7 Plus, sip my coffee and compose my thoughts. I’m focused and ready to work. read more

An overnight spot on the Étang de Leucate

After two days watching our aire slowly submerge under a purple sky filled with endless rain, we drove south for half an hour to Leucate. We visited this area several times last year. There’s a well-equipped aire close to the beach, a few decent wild camping spots and, highest on Cynthia’s list of priorities, a decent laverie, a launderette, open daily until 10pm.

Cynthia wasn’t quite so keen on whipping out her dirty smalls when she noticed the laverie’s only other customer. A middle-aged homeless man, stinking of whiskey and urine, slouched at a table normally reserved for folding clean clothes. As laying out our freshly laundered bedding would mean moving his grimy radio, plastic pack of rolling tobacco and two full whiskey bottles, we decided not to bother. read more

Moving From Wheels to Water

by Paul Smith on February 28, 2017
If we appear to have gone a little quiet, it’s probably because we have moved back onto the water. If that’s the case, you need to head over to our boating blog site here.
{ 0 comments }

On Friday 24 February at almost exactly 1200 (noon) we crossed the border from France to Switzerland.  Wasn’t much of a crossing–there was no one at the border station to greet us!  We had passports out and ready to go.  Oh well, no worries!  We parked just across from the border station, and walked to a gas station a short distance away to buy our CF (Swiss Francs) 40 highway vignette that allows us to drive on the Swiss motorways.

I have considered Switzerland one of my homes away from home for a number of years, as I flew there so frequently during my tenure as International Flight Attendant.  I have always felt comfortable there.  And now I find myself feeling even more comfortable in France after spending the last nearly four months there. read more

Tales of Woe: From the Sweltering French Mediterranean to the Snow Blanketed Swiss Alps

Have you missed us?

Please accept my apologies for not updating the blog in recent weeks. Thank you, if you are one of the many blog subscribers concerned enough about our wellbeing to email me. I am well. Cynthia is well too. We’re both alive and kicking and having a wonderful time.

We’re in Switzerland now, parked by a sunlit harbour in Saint-Aubin-Sages on the northern shore of forty kilometre long lake Neuchâtel. I should be writing, but I can’t help gazing out of my bedroom window five miles across the lake to the snow capped alps towering over the southern shore. read more

Food for Thought—Eating on the Road

I am proud to say, that Paul and I have not darkened the door of any McDonald’s or other fast food establishments.  This wasn’t always the case for either one of us in the not too distant past.  We never found ourselves ordering “we’ll have fries with that” at Micky D’s, but we both have a soft spot when it comes to Subway.

Over the past 6-7 months we kept educating ourselves on appropriate food for sustaining good health.  This project mainly falls on my shoulders because I have the time to research it, and I am passionate about good, healthy food and staying well.  And staying well as the years progress becomes ever more important. read more

Troubled by Wind on the Mediterranean Coast

On Monday morning we tackled a long overdue item on our administrative to do list. We needed an address in France where letters and parcels could be sent to us.

We made an attempt at setting one up last week. We popped into a small post office in Bages four miles from Peyriac-de-Mer where we’ve been staying for the last week. We aren’t very good at communicating what we want in a post office, or anywhere else for that matter, but we’ve successfully overcome the post office first hurdle. We now know how to get in. read more

Motorhome Versus Narrowboat expenses over a three month period

I lived afloat on my 62’ narrowboat James No 194 for six and a half wonderful years. Many boat owners will tell you with a wry smile that B.O.A.T. is an acronym. It stands for ung In Another Thousand. It’s true that boat ownership can be expensive, but how do the costs compare with a motorhome?

I’ve listed and broken down our costs for a three month period for each. Both are the costs for living on board full time. In both boat and motorhome we spent a fair amount of time cruising or touring rather than sitting in one spot for weeks or months on end. In case you’re unfamiliar with either my boat or our motorhome, here’s a little about each. read more

Walking in the Languedoc Hills: Winter Motorhome Life at its Best

After shopping in Narbonne at the beginning of the week we decided to return to our Christmas aire at Gruissan. The aire was pleasant enough, but a little too busy for us. Sixty four motorhomes half filled the large harbour parking area. Many were there for the winter. Most of the owners were French and spent hours standing in groups discussing the activity around them.

We enjoyed the view from the harbour and the clanking of halyards against masts on windy nights over Christmas so we decided to try again. We suspected that the numbers would have reduced after the Christmas festivities. Cynthia guessed at forty. I was confident that there would be no more than thirty five. We were both in for a surprise. read more

Out of the Starting Gate—2017 arrives at our doorstep!

It’s hard to believe that just a week ago we were ringing in the New Year with our chocolate and bio-organic (delicious!) champagne.  A good start and a great week was had by us…..

January 1st found us out the door and on the boardwalk of Peyriac de Mer, and from there we made our way along the trails that circle the estuaries here and then up into the surrounding hills that offer the best of views and nice little niches for a quick bite and a hot beverage.

As it can be rather windy in this area, we were particularly happy that this first day of the new year was a sunny, clear and tranquil one.  There were many people out enjoying this day, but we never felt that we couldn’t have the peace and tranquility we so covet.  There is plenty of room for many people to enjoy the environs without stepping on other people’s toes. read more